My last wine-tasting trip took me to Argentina, but today's is not that far away: Head to a fine little wine region north of Bourgogne, some 180 km southeast of Paris on the edge of Champagne: into Chablis

Chablis wines, made from the Chardonnay grape, are no longer an insider's tip reserved for wine connoisseurs. After all, nearly 2.5 million bottles of Chablis were imported to Germany in 2013. This makes us the third strongest export market and the Chablis wines the Bourgogne bestseller in Germany, making up 69% of Bourgogne's white wine deliveries! 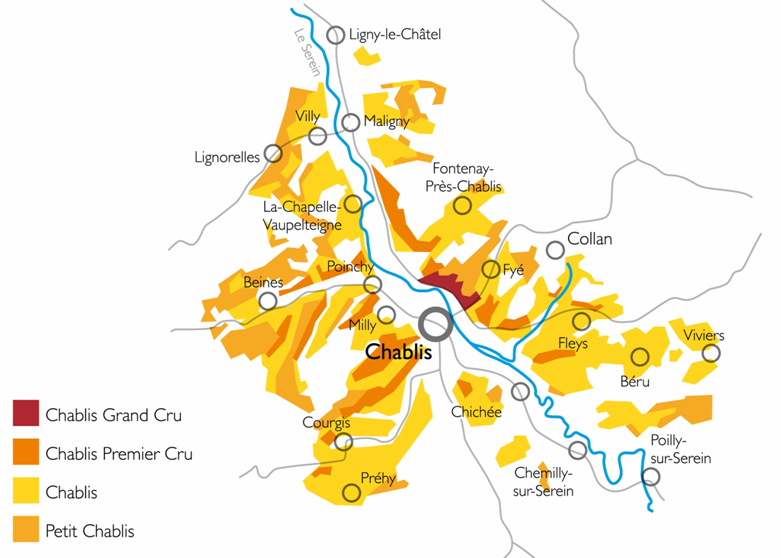 The Chablis vineyards cover approximately 5400 hectares with 47 layers (called" Climats ") along the Serein River. 300 winegrowers produce 40 million bottles of Chablis per year here. The largest share is the simple Chablis, followed by Petit Chablis, the Chablis Premier Cru and the Chablis Grand Cru. All Chablis wines from the region are made from varietal Chardonnay grapes whose centuries-old traditions go back to Roman times and originated in Bourgogne. Special features that make the Chardonnay thrive particularly well here are the lean and particularly calcareous soils of the region, which are located on a 150 million year old rock base and are therefore characterized by their very special terroir.

The trade association de Bourgogne Wines BIVB, which unites all winegrowers, is launching a major campaign for the region between 2014 and 2016, inviting guests to tastings and special events to celebrate the diversity and uniqueness of their wines. Wines.

So I was together with a few dealers, press representatives and as further blogger Torsten Goffin into the Osman 30 in the Cologne MediaPark to ei invited to an exclusive dinner with wine accompaniment. The restaurant is located on the 30th floor of the KölnTurm with a spectacular view of Cologne and a welcoming terrace.
Various winegrowers and members of the BIVB presented their region and the various appellations in detail. For each course there were different wines for tasting, with appropriate reference to the possible sources of supply and with exciting background information on the exact locations.

The mentioned association for Chablis wines BIVB is supported in Germany by the "information office for Chablis wines". Behind this is the agency Sopexa S.A., Germany.CologneTurm tower in the MediaPark above Cologne "src ="/images/image-140420191551gYaD.jpeg "alt =" Chablis reception on the terrace of the Osman 30 in the KölnTurm in the MediaPark "border =" 0 "itemprop =" image "> view from the terrace on the 30th floor is really breathtaking and thanks to the nice weather, we were able to get our aperitif, in this case a petit chablis from 2012, from the Domaine William Fèvre There, overlooking Cologne, the Petit Chablis goes perfectly with the Flying Fingerfood, tasting fresh, fruity and light - just the right summer wine for lukewarm evenings on the terrace - the "little" Chablis does not taste good quite as mineral as the big brothers, but also has some easy approaches in this direction, but the fresh and slightly floral notes outweigh this.

The dinner itself consisted of four further, seasonally and regionally appropriate courses, in which the rest Wines were quite good and increased from one to the other. There were two different Chablis or Chablis Premier Cru for the starter plate and the intermediate course, and finally four Premier and Grand Cru for the main course.

The starter plate was my clear favorite with the different textures, temperatures and flavors. Especially here you could see again how great the wines harmonize with the food. The Chablis 2012 from the Domaine Vocoret et Fils from Chablis did not taste so good to me. Overall, he seems rather boring and flat - in combination with the appetizer, however, he was wonderfully harmonious and convinced by its freshness and the mineral, almost earthy and metallic tones. Overall, it does not contain much acidity and smells of peaches - just a bit weak, but really scary in combination.

The second Chablis , also from 2012 and from the Domaine Gautheron from Fleys, on the other hand, was absolutely convincing. Fresh and light with a gentle earth and grass note, notes of citrus and a mild acidity, he was absolutely convincing. It smells sweet and flowery immediately after opening, but this flavor disappears quite quickly. In contrast to his predecessor, he looked far too dominant for the starter.

In between, a risotto of asparagus - you could see it again with two different Chablis Premier Cru: The Chablis Premier Cru Montmains from 2011 " Les Vieilles Vignes" by Pascal Bouchard went well with the risotto. It smells flowery, sweetish and light, slightly spicy with rosemary scent and subtly woody and also tastes correspondingly fresh, herbal-spicy and with a slightly salty-mineral and floral note, without being too dominant.

Der 2011, from the Domaine Louis Moreau , has the aromas of ripe fruit, sweet apple and pineapple and smells much more perfumed than it finally tastes.My clear favorite - from all four of the wines presented for the main course, to take that in anticipation - is the 2011 Chablis Premier Cru Vaulorent from the Domaine Nathalie et Gilles Fèvre , It has a fresh and fruity sweet, ripe fruit like mango and peach, with mineral notes and tastes fresh, mineral and herbal rich, without too much acid.

The Chablis Premier Cru Montée de Tonnerre from 2011 by the wine cooperative La Chablisienne , on the other hand, looks rather weak in comparison and falls slightly behind. Its taste and fragrance are quite similar, but its flavors are mellower and more subdued and more reminiscent of earthy notes without being musty.

My favorite of the Grand Crus is the Chablis Grand Cru Les Clos of 2010 by Garnier et Fils . He has a subtle sweetness, smells herbal-spicy and slightly mineral with delicate herbal aromas. It tastes juicy and intense, but contains a little more acidity than my favorite Premier Cru, so it only lands in second place.

The Chablis Grand Cru Blanchor from 2009 on the Domaine Long-Depaquit was very interested in the run up to me. The winery dates from the 18th century and has been run by Albert Bichot since the 1980s. The Grand Cru smells of pineapple and rosemary, fresh meadow and grass, has in the taste but very little acid, even if it tastes fresh and "green". Compared to the other Premier and Grand Crus, however, he was the least convincing me - unfortunately he just lost something. The 2010 and 2011er years could convince me much more.

My sincere thanks go to the Information Office for Chablis wines or Sopexa SA and the Bourgogne wine association BIVB for inviting you to the exclusive Chablis dinner and providing the photos shown in the first photo Chablis wines for tasting.
Chablis is a wine region that I admittedly had not so much on the screen before, but whose wines mainly tell me about their complexity, the mineral, fresh taste and the gentle, not overly perfumed bouquet could convince. Many thanks for the exciting insight!
Further information can be found at http://www.chablis-weine.de/